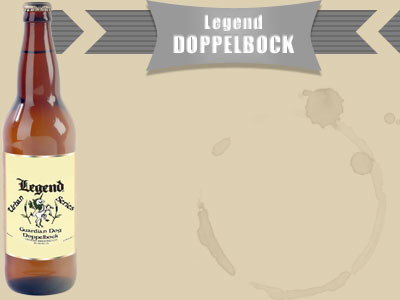 Richmond, Virginia has many well-known and many times told urban legends. One of the most popular is of a black dog that is said to guard a child's grave. Some believe the iron statue of the black dog resided in front of a Richmond Shop many years ago. During her short life, the little girl would pet and talk to the dog as she passed on her way to school. When she died of scarlet fever, the statue was given to her family in order to avoid being melted down for the war effort, and placed by her grave in Hollywood Cemetery. The dog has a personality of his own and has been reportedly discovered looking in various directions. He is said to come to life if he feels the need to protect his young mistress. Legend Guardian Dog Dopplebock makes use of Vienna and dark Munich malts as the base, also incorporating Cara-Munich, Aromatic, and Chocolate malts for a hefty, toasty beer in flavor and aroma. Hops are used only for a counter to the malt sweetness. No aroma hops are added. Expect a deep mahogany color, a rich malty aroma, and a complex flavor that truly celebrates malted barley in its various forms. Look for plenty of biscuity and bready flavors, accented by caramelized sweetness, finishing smooth and mellow with hints of chocolate. ABV: 8%